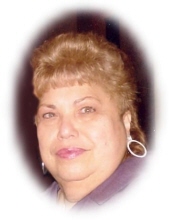 Meriden- Ada L. Ramos, 67, wife of the late Juan W. Ramos died on Thursday, March 18, 2010 at MidState Medical Center surrounded by her loving family. She was born January 21, 1943 in Quebradillas, Puerto Rico, a daughter of the late Beatriz Alago. Ada was a loving mother, grandmother and great-grandmother who was devoted to her family. She will be deeply missed by all. She is survived by four daughters and their husbands, Luz Guerra and Ulises Carrero of Meriden, Adelaida and Reginald Green of New Britain, Ilsa and David Nieves of Meriden and Sonia and Obed Vega of Maryland, three sons and their wives, Wilfredo Ramos and Denise Acevedo of Florida, Luis Ramos and Holly Ricker of Meriden and Eduardo and Bohdana Ramos of Italy, and a brother Jose Luis Perez-Alago and Sister Idsa Gutierrez-Alago both of Puerto Rico. She also leaves fourteen grandchildren; Beatrice Nieves, Alberto Guerra, Jescenia Rodriguez, Jacqueline Pennyman Adams, Nastassia Rodgriguez, Daniel Green, Amanda and Jazmine Nieves, Nicaela and Obed Vega Jr., Johnathan and Lanie Pauli and Melissa Ramos, eight great-grandchildren; Kaila Jones, Christopher Claudio, Nykolas Nieves, Pedro Raelyk and Izaia Marquis Valentin, Teya Guerra, and Jeanazier and Jaylon as well as many nieces, nephews and cousins. She was predeceased by her granddaughter Christina Guerra-Valentin. Relatives and friends may call at the Beecher & Bennett-Flatow Funeral Home, 48 Cook Ave., Meriden on Sunday from 2-5pm. A graveside service will be held on Monday, March 22 at 1:30pm at Sacred Heart Cemetery, Meriden. A reception will follow at the Masonic Temple, 112 East Main St., Meriden. The family would like to thank VNA of Meriden and the Staff at MidState Medical Center for all their dedication and compassion during a very difficult time.