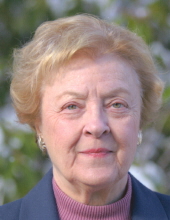 Janet Andersen Larsen, 86, passed away peacefully on Tuesday July 31st, 2018 at Hospice in Branford. She was the daughter of the late Horace P. and Mildred B. Andersen. Janet was a lifelong resident of Hamden, graduating from Hamden High School in 1949, and Quinnipiac College in 1971. She worked a number of years as a dental secretary. Janet is survived by her children Rebecca (Frank), Brenda (Ed) and Peter (Ann), five grandchildren, four great-grandchildren and three nephews. She was predeceased by her sons Veggo and Eric Larsen, her brother Lee Andersen, sister Karen Peterson, and former husband and good friend Edwin V. Larsen. There are no calling hours. Burial will be at the convenience of the family.