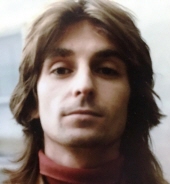 Local musician Ronald F. McCormick, Jr. has passed away at age 60. Ronald, better known as 'Ron Chiffon,' was born in New Haven on December 18, 1956. He was raised in Wallingford by his father Ronald F. McCormick, Sr., a Korean War hero, and mother Patricia McCormick. He graduated from Lyman Hall H.S. and earned a bachelor's degree in communication from the University of New Haven. He was a talented musician, who mastered several instruments at a very young age (primarily vocals and guitar). He played with several bands in CT, NY, and VT. He was also a great athlete, marvelous cook, amazing songwriter, designer, and a rare art and antique dealer. He was very proud of his Irish heritage and had a kind Irish heart! From childhood until his last days, he was a loyal NY Giants fan. He passed away in Vermont, where he had once resided for many years, on Oct. 12, 2017. He is survived by his brother Kevin McCormick, Kevin's wife Moira McCormick, and his sister Deborah Varney. His sister Winifred McCormick-Cable predeceased him. He also leaves behind five nephews, three nieces, three grandnieces, one grandnephew, several aunts and uncles, and numerous cousins. He was closest to his cousins, artist Paul Harriot Jr. and musician Gary Harriot. “Ron Chiffon” will be greatly missed by all those who had the privilege of knowing him. Friends are invited to visit with his family at Beecher & Bennett Funeral Home, 2300 Whitney Ave., Hamden Saturday, October 21 from 11:00 AM-1:00 PM. During this time at 12:00 noon, a Prayer Service will take place. Interment will be private.