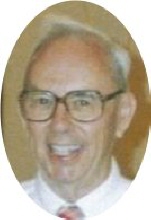 In Woodbridge, October 13, 2007, A. Lloyd Peck, formerly of Hillfield Rd., Hamden, husband of the late Doris Richey Peck, father of Betty Kelly and her husband, Michael of Long Beach, CA, the late Barbara Black, Richard Peck and his friend, Linda Prokop of Milford and Janet Riordan of San Juan, Capristrano, CA. Also survived by 3 grandchildren, Seth Black and his wife Stephanie of Dallas, TX, Sara Black of Collingsville, CT and Victoria Riordan of San Juan, Capristrano, CA. Mr. Peck was born in New Haven, January 1, 1923, son of the late Wesley and Josephine Hogan Peck. He worked in the printing industry from 1945 to his retirement in 1987 at the former Koppel Photo Engraving and the former Swan Engraving in Bridgeport. He was a member of the Mt. Carmel Congregational Church, Hamden and former President Emeritus of the Church, member and previous Trustee of the Mt. Carmel Burial Grounds Society, volunteer fireman for the Westwoods Firehouse in the 50's and 60's and a Little League Basketball Coach in 1960 & 1961. Mr. Peck served in the United States Coast Guard during WW II, from 1942 to 1945. The Mayor of Hamden presented him with a hand drawn scroll at the town's Bicentennial Ceremony in 1976, acknowledging the Peck family to be the oldest continually living family in the town of Hamden, arriving circa 1740. Funeral Service at BEECHER & BENNETT, 2300 Whitney Ave., Saturday, Oct. 20 at 10 a.m. Friends may call Friday from 4-7 p.m. Interment will be in Mt. Carmel Cemetery, Hamden. The family will be having refreshments and conversation after the burial ceremony in the Parish Hall parlor room at The Mt Carmel Congregational Church, 3284 Whitney Avenue in Hamden(between The Beecher & Bennett Funeral Home and The Mt Carmel Cemetery). This will take place from 11:30AM until 2:00PM. All are invited. In lieu of flowers, please send donations in the name of Barbara Peck Black to: The Breast Cancer Fund, 1388 Sutter Street, Suite 400, San Francisco, CA 94109-5400 or breastcancerfund.org/honorform