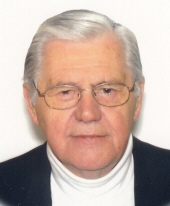 Adam Riegelmann of Branford, formerly of Bethany, and husband of the late Katharine (Dekany) Riegelmann passed away suddenly on September 1, 2012. Mr. Riegelmann was born on October 24, 1937 in Budapest, Hungary, the son of the late András and Iren (Vég) Riegelmann. As a teenage freedom fighter during the Hungarian uprising of 1956, he and his wife escaped the country under the sponsorship of Tabor Lutheran Church of Branford and this began his American dream. At the age of 19 he married on January 12, 1957 and soon after he was awarded a scholarship to the University of Virginia in which he graduated with a B.A. in Engineering. Settling back in New Haven and immediately starting a family, he became an entrepreneur in the tool and die industry thus creating Production and Tool Co. and helping to create the development of the Long Wharf area. Also known internationally for his engineering in Nuclear Medicine Industry. Mr. Riegelmann was known in the community for his generosity and humanitarian work, enjoyed playing handball, traveling, and spending time with his family. He is survived by his sister, Anna Barta; four children, William A. Riegelmann, Katalina I. Riegelmann, Maria E. Riegelmann-Bacote (Horace C. Bacote Sr.), Susan D. Riegelmann, and adopted son Lee Nameth (Olga Nameth); Nine grandchildren, William, Jr, Dianna, Cynthia, Erica, Katharine, Zachary, Sadie, Jacqueline, Horace Jr; three great-grandchildren, Sarah, Adam, and Paul John. Funeral service will be Friday, Sept. 7 at 11 am in Tabor Lutheran Church, 45 Tabor Drive, Branford. His family will receive friends at church Friday morning from 9:30 to 11. Interment will follow in Tabor Cemetery. Arrangements in care of BEECHER & BENNETT, 2300 WHITNEY AVE., HAMDEN. In lieu of flowers please send a donation on his behalf to The American Red Cross, 703 Whitney Ave, New Haven, CT 06511.