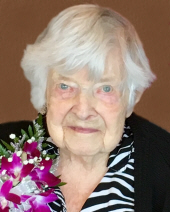 Mrs. Agnes M. Welter, age 100, of Port Charlotte, FL passed away on February 10, 2018. She was the widow of the late Ralph A. Welter. Born in Waterbury, CT on October 23, 1917, she was the daughter of the late Anthony and Johanna Waznis Bruzevicius and was raised in Fair Haven, CT. She is survived by her sons; Richard A. Welter and his wife Bonnie of Punta Gorda, FL and Frye Island, ME, and Ronald B. Welter and his wife Marilyn of Englewood, FL (previously Cheshire, CT), her grandchildren; Cynthia Given, Sandra Reid, Ronald B. Welter, Jr. & Lorraine Hoynack, 6 great-grandchildren; her sister-in-law Eileen Welter of Hamden; and many nieces and nephews. She was predeceased by sisters Marion Rice and Theresa Murphy, brother Alan V. Bruce (formerly Alphonse Bruzevicius), Ronald’s first wife Carol, and granddaughters Carolyn Welter and Virginia Welter Hoffman. Agnes was a member of Eastern Star, Golden Rod Chapter. She had lived in Fair Haven, Cheshire, Meriden, and Wallingford, CT and retired from First Bank of New Haven (now Bank of America). Family members are invited to attend a graveside burial service at Beaverdale Memorial Park, Section H, Hamden on Monday, June 4th at 10:00 AM. In lieu of flowers you may make contributions in her name to a charity of your choice. Arrangements c/o Beecher and Bennett Funeral Home, 2300 Whitney Ave., Hamden, CT.