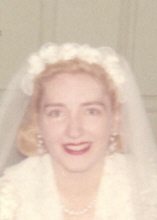 In Derby, July 18, 2007, Agnes Marie Harling Johnson, 87, of Derby, formerly of Church St., Hamden for over 30 years, wife of the late Frederick Axel Johnson. Mrs. Johnson is survived by a daughter, Claire Esposito and her husband James, with whom she resided and a granddaughter Alicia Esposito also of Derby. In addition to her husband, she was predeceased by a daughter, Patricia Johnson and two brothers, Kenneth and Robert Harling. Born in New York City on July 6, 1920, Mrs. Johnson was the daughter of the late Michael and Agnes Marie Delaney Harling. She was a graduate of Newtown High School in Queens, New York. During her career, she worked as a secretary for the former Hartenstein Engineering Co. in New York City. She was a parishioner of St. Brendan Church and had been a member of the Ancient Order of Hibernians. Graveside service Tuesday, July 24 at 1 p.m. at Hamden Plains Cemetery. Arrangements under the direction of BEECHER & BENNETT, 2300 Whitney Ave., Hamden.