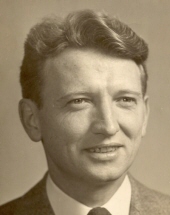 Albert E. Semmler, 91, of 200 Leeder Hill Drive, Hamden died Monday, February 12, 2007. Born in Seymour, CT on January 3, 1916, son of the late Emil Semmler and Bertha Kunkel Semmler. Survived by his wife of 58 years, Mary Lou Semmler. Also survived by two daughters, Dr. Cynthia Vakareliyska of Eugene, OR and Suzanne Stover of Rochester, NY, and her husband, Stewart; also two grandchildren, Jonathon Stover and Emily Stover. Predeceased by his brother Arthur O. Semmler of Cleveland, OH. Prior to attending college, he worked for a machine shop in Seymour and for Naugatuck Glass Company. He served as divisional leader at YMCA Camp Mohawk, played in the Emil Senger American Legion Fife and Drum Corp of Seymour, and was a member of Lessing Lodge ODHS there. He received an undergraduate degree in education from the former New Haven State Teachers College, now Southern Connecticut State University, and a graduate degree from Yale. During World War II he served as an ensign in the U.S. Maritime Service and in the Merchant Marines unarmed ships as a Purser - Pharmacist Mate, concluding four years in the service with a year-long trip around the world. After returning to CT he was hired as a teacher in the Laboratory Schools at SCSU, taught in the Roger Sherman School and served as principal of the Summer School Emergency Training Program in the Barnard and Orchard Street schools in New Haven. He was past president of the SCSU Faculty Association, secretary of the State Colleges Association, and Director of the Student Teaching Program at SCSU until his retirement in 1976. Mr. Semmler was well known as a baritone soloist, studied voice in New York City and sang for several years in New Haven churches. He served as past president of the High Lane Club and appeared in numerous musical shows there, including the lead in Fiddler on the Roof, Kiss Me Kate and Take Me Along. He also participated in the Experimental Opera Company's presentation of The Merry Widow, and sang in the University Glee Club of New Haven. Active in politics and the Democratic Party, he served as past chairman of the 21st Ward in New Haven. He was a longtime member of Trinity Lutheran Church in New Haven, where he sang in the choir and served on church council. He was a sports fan, and enjoyed ping pong, bowling, playing bridge, dancing, and traveling. Mr. Semmler was known for his outgoing personality and his sense of humor. Funeral service at 10:30 a.m. on Saturday, February 17 at Trinity Lutheran Church, corner of Orange and Wall Streets, New Haven. Private interment. In lieu of flowers, memorial contributions may be made to the Organ Fund at Trinity Lutheran Church, 292 Orange St. , New Haven , CT. 06510 . Arrangements under the direction of BEECHER & BENNETT, 2300 Whitney Ave., Hamden.