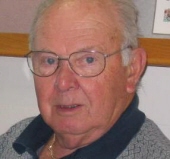 Albert G. Hauser, age 86, of Hamden, died peacefully on March 28, 2016, at the Masonicare in Wallingford. Born in New Haven on July 15, 1929, he was the son of the late George and Ruth (Todet) Hauser and step-son of the late Beatrice (Barber) Hauser. Albert is survived by Priscilla Mae (Greene) Hauser, his wife of 45 years. He is also survived by his daughter Kristen (Hauser) Murphy, her husband Sean and their children Patrick and Ryan Murphy of Cheshire; his son George Hauser and his children Melissa and Bryan Hauser; and his sister Mary Jane Jones of New Hampshire. A life-long resident of Hamden, Albert was a Cost Accountant for the former Safety Electric Company. He retired from Wallingford Steel Credit Union in 1992. He enjoyed Duck Pin bowling for over 50 years and was an avid Red Sox and UCONN Women's Basketball fan. Albert enjoyed vacationing with his family on Cape Cod and spending time watching his grandsons' sporting events. His funeral will be from BEECHER & BENNETT FUNERAL HOME, 2300 Whitney Ave, Hamden, Saturday April 2nd at 8:15 AM followed by a Mass of Christian Burial at 9:30 AM in the Church of the Epiphany, 1750 Huckins Rd, Cheshire. Friends may also visit with his family at the funeral home on Friday from 4:00 to 8:00 PM. Interment will take place in Beaverdale Memorial Park, New Haven following the Mass. In lieu of flowers, please send donations to Masonic Healthcare Center 22 Masonic Ave. Wallingford, CT 06492