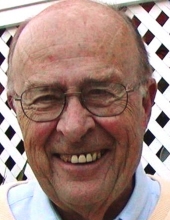 Albert H. Scharf, Jr. of Ashlar Village, Wallingford, husband of 62 years of Marie Werner Scharf, passed away Monday, January 6, 2020. He was born in Providence, RI February 4, 1931, a son of the late Albert H. and Catherine Flood Scharf, Sr., and had resided in Hamden for 52 years before moving to Wallingford in 2009. Father of Stacie Davis and her husband Chris of Spring Lake, NJ, grandfather of CJ Davis of Spring Lake, NJ, and brother of Donald Scharf of Madison, CT. He is also survived by sister-in-law Laurie Werner and her husband Keith Goble, niece Erika Marie Wick and her husband Neil, and baby Jay Wick. He graduated from the Rochester Institute of Technology in 1953 and was employed with the Camden Machine Co. and Camco Fittings Co., which became Capitol Manufacturing, and later the Harsco Corp. He retired in 1994 as Vice President after 42 years. Al was a communicant of St. Joan of Arc and served on the Finance Board, before joining Our Lady of Fatima Church. He was on the Board of the Hamden Chamber of Commerce, the Hamden Police Commission, the Hamden Fire Commission, and was a volunteer fire fighter with the West Woods Volunteer Fire Co. Mr. Scharf also served on the Advisory Board of Sacred Heart H.S. in Hamden. He was a board member of and enjoyed golfing with his friends at the New Haven Country Club. Al enjoyed his ten years at Ashlar Village making new friends and being involved in the community activities. Friends may visit with his family Friday, January 10th from 4-7 p.m. at BEECHER & BENNETT FUNERAL HOME, 2300 Whitney Ave., Hamden. Mass of Christian Burial will be held in Our Lady of Fatima Church, Wallingford Saturday, January 11th at 10 a.m. Interment will follow in St. Mary's Cemetery. In lieu of flowers, contributions in Al's memory may be made to the Masonic Charity Foundation, P.O. Box 70, Wallingford, CT 06492.