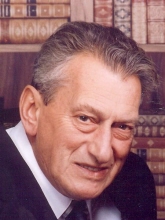 Meriden- Albert M. Tomassetti, 84 husband of the late Angela (Polvani) Tomassetti for 56 years passed away on Wednesday, April 16, 2008. He was born January 11, 1924 in Meriden a son of the late Vincent and Mary Tomassetti. Albert was a lifelong resident of Meriden, a graduate of Meriden High School, a member of the Free Masons and active in the Shriners. He had owned and operated a grocery store in Meriden for 40 years. He was a veteran of World War II, having proudly served his country in the U.S. Marines in the Pacific Theater. He is survived by two sons and their wives, Richard and Catherine Tomassetti of Deep River and Lee and Claudia Tomassetti of Westbrook, two brothers, Vincent Mario and his wife Irene Tomassetti of Meriden and Edmund and his wife Carol Tomassetti of Torrington, one grandson, Taylor Tomassetti as well as many nieces and nephews. He was predeceased by a sister, Val Tweedie. Relatives and friends may call at the Beecher & Bennett-Flatow Funeral Home, 48 Cook Ave., Meriden on Tuesday, April 22 from 5-7 p.m. Burial will be private.