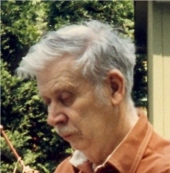 Meriden- Albert R. Jourdan, 95 died on Thursday, March 18, 2010 at Masonic Healthcare Center in Wallingford. He was born November 9, 1914 in Branford, Ct a son of the late Albert S. and Genevieve (Carney) Jourdan. He graduated from Waterbury High School and Wentworth Institute in Boston and was a computer programmer for Factory Insurance in Hartford before retiring. Albert also owned and operated AirJay Recording Studio in Meriden for many years. He is survived by a sister and brother-in-law, Helena and Arthur Boutilliar of Meriden, six nieces, two nephews and one great-nephew. He was predeceased by a sister Frances J. Holstrom A funeral service will be held on Monday, March 22, 2010 at 10:30am at the Beecher & Bennett-Flatow Funeral Home, 48 Cook Ave., Meriden with the Fr. LaPlante officiating. Burial will follow in Sacred Heart Cemetery. In lieu of flowers donations in Albert's memory may be made to the Meriden Humane Society, 311 Murdock Ave., Meriden, CT 06450 or to the Curtis Home, 380 Crown St., Meriden, CT 06450.