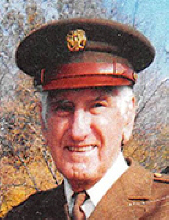 Albert Stephen Redway, 93, of Hamden, passed away peacefully on September 26, 2015 at Hospice in St. Mary's Hospital in Waterbury. He was the beloved husband of Betty Opperman Redway. Al was born in New Haven on February 12, 1922 a son of the late Martin and Julia Redway. He was the father of Diana Redway Donnelly (Charles) and the late David Redway; grandfather of Justin Redway Watson; great-grandfather to Maxwell and Aidan Watson; brother of Edward Redway (Margaret). He was proud to be inducted into the U.S. Army on January 6, 1941. Al went to the University of Vermont on the GI Bill and became a high school teacher in Burlington, VT. He later became a principal of Hardwick Grammar School. During his second career, he was an industrial engineer for Mite Corp. He and his family have had many adventures while visiting 48 states. He was born on Lincoln's birthday and studied the president's life extensively until Albert's death. Friends are invited to visit with his family on Thursday, October 1st from 9:00 to 11:00 a.m. at BEECHER & BENNETT, 2300 Whitney Ave, Hamden, followed by a Memorial Service with Military Honors at 11:00 a.m. in the funeral home. Burial will be private. Contributions in Al's memory may be sent to the Alzheimer's Association of CT, 2075 Silas Dean Highway, Rocky Hill, CT 06067.