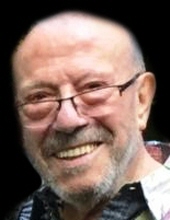 Aldo E. Desiato, 84, of New Haven passed away peacefully on August 8, 2019 at St. Raphael Campus, Yale-New Haven Hospital. Born in Melizzano, Italy on October 18, 1934, Aldo was the son of the late Pietro and Angelina (Donisi) Desiato. He was the beloved husband of Lucia (Rossi) Desiato for 55 years. They married on August 12, 1963 in Italy and immigrated to the United States on February 21, 1964, and Aldo proudly became a US citizen in 1968. On his arrival in the US, Aldo began working at Henry Richards in Hamden, becoming a Quality Inspector. He later became a CNA at the Masonic Home until his retirement. Aldo loved spending time with his family, making wine, and playing bocce and cards at the Hamden Bocce Club. He was an avid Napoli Soccer Club fan, and loved to travel, especially back to Italy. Along with his wife, he is survived by his children, Angelina Morales and her husband Richard, Pietro Desiato and his wife Cheryl (Trask), Carmen Desiato, Paolo Desiato and his wife Laurie (Rago). Affectionately known as 'Nonno,' he is also survived by grandchildren John Sheehan and his wife Brittany, Alyssa Sheehan, Anthony Desiato, Julia Desiato, Daniel Desiato, and Benjamin Desiato; and great-grandchildren Norah and Dominic Sheehan. He also leaves his siblings, Angelina Desiato, Dora Desiato, Elvira Desiato, and Claudio Desiato; brother-in-law Gaetano Rossi and his wife Maria Adele (Gaudio); nieces and nephews, Josephine Rossi and her husband Andy Bucci, Lorenzo Rossi, Martin Mezza and his wife Tina, and Dina (Mezza) Menchetti and her husband John; plus many other nieces and nephews in Italy. He was predeceased by his brothers, Luigi and Mario Desiato, sister-in-law Maria Antoinetta (Rossi) Mezza, and parents-in-law Lorenzo Rossi and Giuseppina (Cermola). Relatives and friends are invited to visit with Aldo's family on Sunday, August 11 from 4-7 p.m. at Beecher & Bennett Funeral Home, 2300 Whitney Ave., Hamden. His funeral procession will leave the funeral home on Monday at 10:30 a.m. A Mass of Christian Burial will be celebrated in Christ the Bread of Life Parish, Blessed Sacrament Church at 11 a.m. Entombment will follow in St. Lawrence Cemetery. In lieu of flowers, memorial donations may be made to the Smilow Cancer Hospital, 35 Park St., New Haven, CT 06511.