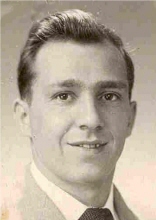 Alexander 'Al' Esposito, age 84, of Orange, passed away with his loving family by his side on August 29, 2010 at the Connecticut Hospice in Branford. He was the husband of Jeanne Penders Esposito for 59 years. Al was born in New Haven on July 23, 1926, a son of the late Michael and Cristina Romano Esposito and was a long time resident of Orange. In addition to his wife he leaves his four children, Alex Esposito of Orange, Joseph (Nicola Kelsey) Esposito of Guilford, Charles (Nancy Setaro) Esposito of Watertown and Ellen Esposito O'Neill (David) of Orange (his devoted caretaker this summer); eleven precious grandchildren, Nicholas, Alexa, Thomas, Alex, Joseph and Julia Esposito, Madeline, Therese, and Frances O'Neill and Allison and Bryan Paradis; two brothers, Pat Esposito of Westbrook, Michael Esposito of New Haven; two sisters, Emily Bodle-Crisci of Hamden and Ann Marie Fuoco of Cheshire and many nieces, nephews and cousins. He was predeceased by a brother Anthony Esposito. Mr. Esposito received degrees from CT State Teachers College, The University of Connecticut and Fairfield University. He was an educator in the New Haven Public School System for 43 years. He taught at Prince Street School, Clinton Avenue School and Fair Haven Middle School where he retired as principal after many years. A veteran of World War II, he enlisted in the US Navy at the age of 17 and served mainly in the South Pacific. Relatives & friends may visit with his family at BEECHER & BENNETT FUNERAL HOME, 2300 Whitney Ave, Hamden, on Tuesday evening, August 31, 2010 from 4 to 8 p.m. and invited to attend a Memorial Mass on Saturday, September 4th at 10:30 A.M. in Holy Infant Church, 450 Racebrook Rd, Orange, CT 06477. Interment will be private. In lieu of flowers contributions in Al's memory may be made to CT Hospice 100 Double Beach Rd, Branford, CT 06405. The family would like to thank the entire staff at Hospice for all the love and care they provided during this difficult time.