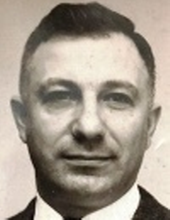 Alexander George Stamatien, a staple of the West Haven community and beloved patriarch of the Stamatien family, died on April 19, 2020 at Yale-New Haven Hospital due to complications from COVID-19 contracted while at the Willows Healthcare Facility. He was 93. Alexander was born on October 14, 1926, and he was a lifelong resident of West Haven. He married the love of his life, Doreen, on January 17, 1951, with whom he enjoyed a loving 45-year marriage. He learned the electrical trade as a teenager by fixing arcade machines at the Savin Rock Amusement Park. He went on to become a master electrician, supporting his family by creating and operating the West Haven Electric Company, serving as the Electrical Inspector for the City of West Haven for 30 years, and instructing for the CT Board of Education 90 IBEW. He was very proud to have held his Connecticut E1 electrical license until the age of 91. He was recognized as a local leader in his field, leading to many appointments including the West Haven Building Code Board of Appeals, Electrical Examining Board for the City of West Haven, the Heating Cooling and Oil Burner Examining Board, and the Charter Member CT State Board of Electrical Examiners. He also served as a member of the West Haven VA IACUC Committee from February 2005 to October 2017. He was a 65 year member of the Annawon Lodge #115 RAM, Past Patron of Golden Rod Chapter #34 of the Order of Eastern Star, and Past Commander of the Bridgeport Chapter of Knights of Templar. More than anything else, Alexander was so proud of his family. He cherished the time spent together at his beloved camp at Shadow Lake in Concord, VT, attended countless sporting events for his grandchildren and family events throughout the years, and was a role model and inspiration for his entire family. He could light up any room with his quick wit and booming laugh. Larger than life, he will be remembered by all who knew and loved him for his simple wisdom, strong work ethic, and fierce devotion to everyone he loved. Alexander was predeceased by his wife, Doreen Margaret Sloane Stamatien, and his son, Alexander George Stamatien, Jr. He is survived by his son, James (Benjawan) Stamatien of West Haven; daughters, Kathleen (Don) Brochu of Weathersfield, VT, Margaret (Jay) Borelli of West Haven, and Cindy (Richard) Kelly of Londonderry, NH; grandchildren, Jesse Fox, Deanna Martin, Brian, Eileen, and Dan Murray, Nicholas, Christopher, Benjamin, Gabriel, Jeremy, and Angela Borelli, Eoghan, Aine, Ceara, and Seana Kelly; and great-grandchildren, Brianna Murray and Kieran Martin. He is also survived by his brother, Aristotle Stamatien, and his sister, Crene Ferraro. A celebration of Alexander's life will be held on a future date to be determined. Private burial arrangements in care of BEECHER & BENNETT, 2300 Whitney Ave., Hamden. In lieu of flowers donations may be made to YNHH COVID-19 Support Fund: http://www.givetoynhh.org/covid-19/.