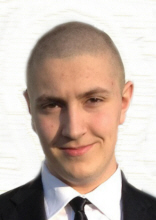 Alexander James McGraw, age 17, of Hamden, passed away on August 31, 2013, from injuries he received in an automobile accident. Born in New Haven on December 19, 1995, Alex is the son of William E. McGraw Jr & Deborah Hoyt McGraw of Hamden. He is also survived by his brother, Michael Christopher McGraw and niece Kylie Palumbo both of Hamden; his maternal grandparents, Arthur & Evelyn Kilroy Hoyt of Milford; aunts, Cathy Russell of Vernon & Meredith Stowe & her husband Arthur of Milford; uncle, Kenneth Hoyt & his wife Christine of Milford and his girlfriend Ashley Gaudio of North Haven. Alex was predeceased by his paternal grandparents, William E. McGraw, Sr and Elaine Anderson McGraw Gagner. A Hamden High School Senior, he was a young man that was everyone's friend; he loved to write music and enjoyed cooking and travel. He was so recently pleased having traveled to Ireland, Wales, England and France on a People to People Student Ambassador Program. Alex was also a member of DeMolay, a Masonic Youth Organization. Friends may visit with his family at BEECHER & BENNETT FUNERAL HOME, 2300 Whitney Ave, Hamden on Thursday, Sept. 5th from 4:00 to 8:00 PM and may attend his Mass of Christian Burial on Friday at 10:00 AM in St. Stephen's Church, 400 Ridge Road, Hamden. Interment will follow in Centerville Cemetery, Hamden. Contribution in Alex's memory may be made to People to People Ambassador Programs, Dwight D. Eisenhower Building, 1956 Ambassador Way, Spokane, WA 99224-4002.