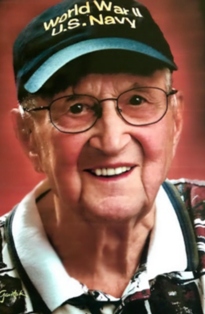 Alfred (Fred) Antonio, 97, of Middletown, passed away peacefully on Thursday, October 14, 2021 at The Weiss Hospice Unit at Middlesex Hospital. He was born in Meriden on January 20, 1924, the son of Dominic and Helen (Michalak) Antonio. He leaves his wife, Janice (Frazier) Antonio of Middletown, daughter Lynn Antonio-Tryon and husband Wayne Tryon of Glastonbury, and one brother, Robert Antonio (wife Nancy) of Moore, South Carolina. In addition to his parents, he was predeceased by two sisters, Marjorie (Antonio) Potter and Pauline (Antonio) Horonzy, and two brothers, Donald Antonio and Louis DeAntonio. He also leaves behind step-grandchildren Heather Tryon-Winship, her husband Matt Winship, and their children Lily and Katie, and Christian Tryon, his wife Rhonda Kauffman, and daughter Violet. He will also be missed by a large extended family of nieces and nephews, and many friends.
Fred led a good and full life. A proud WWII veteran, he enlisted in the U.S. Navy after graduating high school at the age of 18 and served 3 ½ years on the attack transport ship the USS Sumter, and carried troops and equipment to 6 islands in the South Pacific. He received several awards as a Machinist Mate First Class. His uniform is now on display at the Greater Middletown Military Museum.
After he was honorably discharged from the Navy in 1946, Fred joined his brother Louis in the construction business and later partnered with his brother Donald to establish Antonio Brothers Builders in Meriden. Together, Fred and Don built custom homes and did residential and commercial remodeling for 35 years. He also served a term as President of the Meriden Builders Association.
Fred was a faithful member of the First Baptist Church in Meriden and served as Chairman of the Deacons and Chairman of the Property Committee of the Church Board of Trustees. His talents, interests and accomplishments were many and varied: In addition to the builders’ association and church positions Fred held, he was a member of the Elks, Unison Club and VFW clubs in Meriden, the Meriden Y’s Men, and the Durham Gun Club. He did so many things, and did them well. Fred was a lifelong learner. He played tennis, and was a bowler, skier, hunter (with his German Shorthair Pointer Schatzchen by his side), fisherman, and winemaker. He golfed until he was 96 years old. In his twenties, Fred got his pilots’ license and owned a plane with 8 of his buddies. In his eighties, he taught himself to play the banjo. He loved music, from classical to country, opera to swing. He enjoyed travel, visiting Europe numerous times and traveling extensively throughout the United States, frequently in conjunction with his Navy reunions. After retirement; he took on and pursued another interest, fine arts and painting in many mediums, watercolor being his favorite. He studied under local artists, joined Gallery 53 in Meriden, Brownstone Art in Middletown, and served a term as President of the Middletown Art Guild. He exhibited his artwork at local craft fairs and art shows and won several awards for his paintings. Fred was a truly remarkable man who touched the lives of many during his long life, a kind, decent soul with a big heart and great sense of humor. But most of all, Fred was a loving, devoted husband and father who cherished time with family and friends.
A memorial celebration of life will be held at the First Baptist Church, 460 Broad Street, Meriden on Wednesday, October 27 at 10:00 a.m. Burial will follow in Walnut Grove Cemetery. Funeral arrangements will be handled by Beecher & Bennett-Flatow Funeral Home, 48 Cook Ave., Meriden. In lieu of flowers, donations in Fred’s memory may be made to the First Baptist Church, 460 Broad Street, Meriden, CT 06450 and/or the Middlesex Health Hospice Program, 21 Pleasant Street, Middletown, CT 06057.