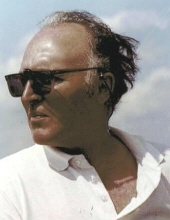 Alfred J. Bianchi, Sr., 90, of Hamden, passed away Tuesday, November 12, 2019 at Masonicare in Wallingford. He was the husband of 64 years to Barbara Lee (Hart) Bianchi. Born in New Haven on June 29, 1929, he was a son of the late Joseph and Amelia (Malavasi) Bianchi. He attended Boardman Trade School in New Haven with honors. A U.S. Army veteran, Alfred served as a radio man in Iceland during the Korean Conflict. After his time in the service he established a custom home building business in New Haven County known as A. Bianchi & Sons. Alfred was a devout yachter, and a senior member of the Branford Yacht Club. He cherished the moments spent with family on the water and would sail to Block Island, Martha's Vineyard, Newport, Long Island, and Plymouth. He loved chatting with other boaters and comparing stories as he walked along the docks, oftentimes taking hours to make it back on land. Alfred enjoyed hunting, fishing, and seafood, so much so that he would have lobster instead of the usual turkey for Thanksgiving. In his later years, his love for construction led him from building homes for families to building intricate model tall ships for his own children and grandchildren. In addition to his wife Barbara, he is survived by his sons; Alfred J. Bianchi, Jr. (MaryEllen) of Orange, Michael D. Bianchi of Stamford, and Damian P. Bianchi, Sr. (Susan) of Durham, his brother Dante Bianchi (Dolores) of Branford, six grandchildren who knew him as 'Poppi;' Alfred III, Robert, Joseph, Amelia, Christina, and Damian Paul, and five nieces and nephews. He was predeceased by his brother Larry Bianchi, and sister-in-law Marion Bianchi. Alfred's family would like to thank West Haven VA Medical Center and his team of caregivers, especially Dieudonne Jules, for their love and support in his final days. A Mass of Christian Burial celebrating Alfred's life will be held on Friday, November 15th at 10:00 a.m. directly in Our Lady of Mt. Carmel Church, 2819 Whitney Ave., Hamden. Interment will follow in All Saints Cemetery. In lieu of flowers, donations in his memory may be made to the American Parkinson Disease Association, 135 Parkinson Avenue, Staten Island, NY 10305 (www.apdaparkinson.org). Arrangements are in care of BEECHER & BENNETT FUNERAL HOME, Hamden.