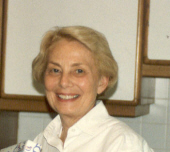 Alice Christina Anderson Sartorelli, age 82, died at her home on March 9, 2011. She was born on June 21, 1928 in New Haven, the daughter of George and Gumborg Anderson. She attended Hamden High School and graduated Larson College in 1948. She began her career as a receptionist for the Law firm of Pouzzner, Hadden, Kopkind & Hadden in New Haven. From 1959 - 1962 she worked for Carwin Company (Upjohn) of North Haven as Secretary to the president. In 1962 she was appointed Registrar of Yale University School of Medicine where she worked until 1970. From 1970 - 1971 she was the Administive Assistant to the Executive Director of the Concilium on International and Area Studies at Yale University. From 1971 - 1973 she served as Administrative Assistant for the Chairman of the Psychiatric Nursing Program of the Yale School of Nursing finally completing her career at the University by serving as Registrar of the School of Nursing for several years before an early retirement to spend more time with her family. She is survived by her loving husband of 41 years, Alan Sartorelli, who is the Alfred Gilman Professor of Pharmacology at Yale Medical School, her three daughters Linda Richey of Norwalk, Suzanne Richey of North Haven and Sandra Sartorelli of New Haven, six grandchildren, Jessica Root, Joseph Pagano, Erica Garipian, Kimberly Umans, Christina Arcangelo and Michael Arcangelo and seven great grandchildren. Alice was a multi talented beautiful lady with a smile that would light up a room. She loved to sing and early in her life she sang soprano at Bethesda Lutheran Church in New Haven. Later because she was so close to her grandchildren she composed both the music and words to a new lullaby which she had recorded. In addition, she was an accomplished prize winning poet. Relatives and friends are invited to call Friday evening 4-8 PM at BEECHER & BENNETT-TAYLOR FUNERAL HOME, 410 Campbell Avenue, West Haven, CT 06516. A celebration of life will take place on Saturday, March 12 at 10:00 AM at the funeral home. Entombment will follow at the Mausoleum at Beaverdale Memorial Park, 90 Pine Rock Avenue, New Haven. Memorial contributions may be made to Connecticut Hospice Inc., 2 Trap Falls Road, Suite 406, Shelton, CT 06484.