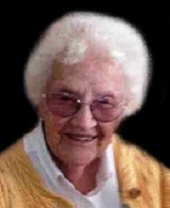 Alice D. Metzler, 102, of Cheshire, wife of the late John Hall Metzler, passed away August 27, 2017 after a brief illness. She was born in New Haven September 7, 1914, a daughter of the late James T. and Edith Glasgow Dalgleish, and had resided in Cheshire since 1952. She grew up in West Haven, and graduated from the Danbury Normal School; which is now Western Connecticut State University, and moved to Hamden after her marriage to John. Alice was an elementary school teacher, having taught the third grade in West Haven in the 1930's, and she later taught in Hamden schools from 1955 until her retirement in 1979. She was a member of the Mount Carmel Congregational Church and enjoyed reading mysteries, playing cards, puzzles, and most importantly, her family. She is survived by a daughter, Margaret M. Clendenin and her husband Barry of Herndon, VA, a son, John R. Metzler of Hartford, her granddaughters, Jaclyn Roxann Metzler and Megan E. Lawston and her husband Joe, and a great-granddaughter, Brooklyn Lawston. Alice was also predeceased by a granddaughter, Kathryn Clendenin. Friends are invited to attend a graveside service in Hillside Cemetery, Wallingford Rd., Cheshire Thursday, August 31, at 1 pm. Arrangements are in care of BEECHER & BENNETT, 2300 Whitney Ave., Hamden. Memorial contributions may be sent to CT Hospice, 100 Double Beach Rd., Branford, CT 06405 or to the Mount Carmel Congregational Church, 3284 Whitney Ave., Hamden, CT 06518.