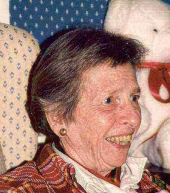 Alice Gore King, 92, passed away on Saturday, May 26, 2007 after a brief illness. She died peacefully at her home at Whitney Center in Hamden, CT. Miss King was born on July 17, 1914 and grew up in New York City. She graduated from the Brearley School and from there went to Bryn Mawr College where she received her B.A. and M.A. She was Chairman of the Remedial Reading Department at the Brearley, and later Assistant Head of the school. In 1950 she founded the Alumnae Advisory Center Inc. in New York, a career counseling organization for college women, where she was Executive Director until her retirement in 1979 when she moved to Rigefield and then to Hamden in 1995. She became a long time resident of Ridgefield living in a cottage on Nod Hill Rd. She was an avid writer of articles and published one book. Alice loved to paint and many of her works were displayed at Whitney Center. In Ridgefield, she became part of the DePasquale family and would fondly call them her "Adopted Five"; John, Rita and their sons Jared, Adam, and Peter. She was loved by her continuing growing family; Adam's wife, Carrie and their sons, Elias and Brennon, Peter's wife, Rachel, and Jared's wife, Somerlie. Alice was a great blessing to all she would meet, especially her close friend at Whitney Center, Barbara Canfield. She will be deeply missed for her sharp mind, wit and sensitive spirt. She was always thinking of others even in her last days. She is now in peace in heaven. Funeral service will be private. Arrangements in care of BEECHER & BENNETT FUNERAL HOME, 2300 Whitney Ave., Hamden.