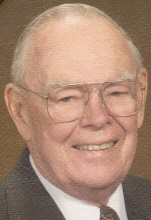 Allen R. Elliott, 85, of Gillies Road, Hamden died peacefully and surrounded by family at Elim Park on September 28, 2011. Born in Beverly, MA on April 15, 1926, the son of the late Earle and Esther Robinson Elliott. Allen is survived by his loving wife of 63 years, Nancy Hord Elliott; sons, Stephen Elliott and his wife Susan Thompson of Newton, MA and Mark Elliott and his wife Jane of Orange; daughter, Susan Elliott and her husband Jeff Hill of Beverly, MA; daughter-in-law, Judith Elliott of Brookline, MA and eight grandchildren. He was predeceased by his son, Kenneth Elliott. Allen proudly served in the U.S. Navy during WWII before becoming a graduate of Boston University and later earning his CPCU. He was Vice- President of Thompson and Peck Insurance Agency, having been with them for 33 years. He was previously employed by the New England Fire Insurance Inspection Bureau and Middlesex Assurance Co. in Middletown and was a past President of the Professional Insurance Agents of Connecticut. Allen was a member of the Spring Glen Church, having served as a Senior Trustee and Council Chairman; former member of the High Lane Club; the Quinnipiac Club; and was active in youth Basketball and Little League of Hamden for many years. A Memorial Service will be held on Saturday, October 15th at 2:00 p.m. at the Spring Glen Church. Memorial contributions in Allen's memory may be sent to the Spring Glen Church, 20 Glen Parkway, Hamden, CT 06517. BEECHER & BENNETT, 2300 Whitney Ave., Hamden, in care of arrangements.