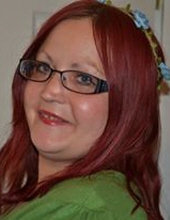 Amy Sue Whitman, 36, of Wallingford, passed away on April 28, 2018 in her home. She was born in Meriden on October 11, 1981, a creative soul who expressed herself through poetry. Amy was filled with joy and spontaneity and would often be seen wearing flowers and butterflies in her hair. Also, she was a lover of animals. Amy enjoyed music from the 1960's including The Guess Who, The Doors, and others. She was a caring woman with a big heart who was deeply loved by her family. Amy will be remembered by her father, John Whitman & his wife Joann of Wallingford; her mother, Janice Frye & her husband Kenneth of Wallingford; her grandfather, Alfred Minde of New York; her brothers, Mark Whitman & Kevin Withington, both of Meriden; her sister, Jessica Goslin & her husband Bobby of Southington; her nephews, Christopher, Brandon, & Tucker Goslin of Southington; close friend, Natalie Russo, who was like another mother to her; aunts and uncles, Linda Foster, Alan, John, James Dembiczak, Sandy Whitman, & Arnold Whitman. She was predeceased by her paternal grandparents, Arnold & Madeline Whitman; maternal grandparents, Jeanette Minde and Raymond Dembiczak; aunt, Madge Ondusko; uncle, Raymond Whitman. Amy was also predeceased by the love of her life, her boyfriend, James Bennett. A Memorial Service celebrating Amy's life will take place at the First Congregational Church, 23 South Main Street, Wallingford on Thursday, May 10, 2018 at 5:00 PM with a reception to follow at the church. BEECHER & BENNETT-FLATOW FUNERAL HOME, 48 Cook Ave, Meriden in care of arrangements.