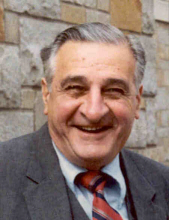 Andrew J. Lucibelli, 91, of Hamden, died peacefully on Monday, May 23, 2011.He was the beloved husband of Jeanette Pagnam Lucibelli. Born in New Haven on February 29, 1920 to the late Rudolpho and Christina Amendola Lucibelli. Andrew was a 1938 graduate of Commercial High School in New Haven before serving in the 776th Ordinance Company of the 76th Division of the U.S. Army. After the war, he was employed by the U.S. Government as a quality control inspector for many years. During his retirement, he worked at Rundbaken, and later at the New Haven Colony Historical Society, the job he loved the most. He was a parishioner of Saint Rita's Church for many years. Besides his wife of 53 years, he leaves two daughters, Jeanette (William) Compton and Elizabeth (Harley) Pretty, both of Hamden; six grandchildren, Nette, Sarah Jane, and Justine Compton and Jenny, Harley and Trevor Pretty; sisters, Teresa Lucibelli, Blanche Porto and Clare Palleria and many beloved nieces and nephews. He was predeceased by his sister Rose Lucibelli and his brother Peter Lucibelli. Funeral from BEECHER & BENNETT, 2300 Whitney Ave, Hamden on Thursday, May 26th at 9:30 a.m. A Mass of Christian Burial will be celebrated in St. Rita's Church at 10 a.m. Friends may visit with the family on Wednesday evening from 5 to 8 p.m. at the funeral home. Burial with Military Honors to take place in St. Agnes Cemetery, Branford.