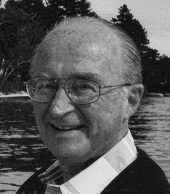 Angus MacArthur, 78, passed away peacefully on March 15, 2009, in Masonicare Health Center, Wallingford, CT. Angus was predeceased by his wife, Muriel 'Mimi' Burr MacArthur. Born in New Haven on December 24, 1930, Angus was a son of the late Hugh and Lucille Commiskey MacArthur. Besides his wife and parents, Angus was predeceased by a daughter, Carolyn Jean MacArthur, a sister, Mary St. John and a brother Robert H. MacArthur. He is survived by his daughters Cynthia B. MacArthur of Port Orange, FL, Margaret Canapinno (John) of Guilford, Susan Monmaney (Dan) of Northfield, VT, his son Robert A. MacArthur (Tracy) of Guilford, his grandchildren, Elizabeth DeLong and Timothy MacArthur, Cindy & Cally Patten, Katie & Jessie Monmaney, Emily & Justin MacArthur, a great grandchild, Michael Angus DeLong, and a special friend Jean Lukens of Cheshire, and several nieces and nephews. He was a 1953 graduate of Yale University and former US Army Officer. He spent most of his career as a self-employed Manufacturersʼ Representative, as well as in executive positions at the former Times Wire & Cable, and the (CT) Masonic Charity Foundation. Throughout his lifetime, he had been active in a number of religious, civic and fraternal organizations, such as Spring Glen Church (Sr. Deacon & Sr. Trustee), Friends of Bermuda Mari time Museum (Chmn of the Board), Kiwanis Intʼl (Past President), Trumbull Lodge No. 22 AF&AM (Past Master), Sphinx Temple AAONMS, Hartford Court No. 141, Yale Club, Hartford Club and the Yale Alumni Fund. He was a member of Mory's and former member of the New Haven Country Club. There will be a private family graveside service and interment. A Celebration of Life reception for family and friends will take place on March 21, 2009. Please contact the funeral home for time and location. Arrangements are in care of BEECHER & BENNETT, 2300 Whitney Ave., Hamden. In lieu of flowers, memorial contributions may be made to the Masonic Charity Foundation, P.O. Box 70, Wallingford, CT 04692.