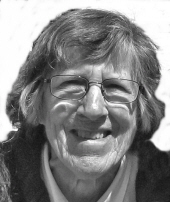 Ann Armstrong Phelps was born in New Haven, CT, August 13, 1921 and died on February 7, 2011. She died peacefully at home at 89 years young. She is survived by her 4 children, John R. Phelps of West Unity, NH, Carol Ann Phelps of North Haven, CT, Peter E. Phelps of New Haven, CT & David W. Phelps of Seattle, WA; 5 grandchildren and Taiga her beloved dog. Her husband Wallace C. Phelps died in 1998. She was a rebel in her youth. After high school in 1939 despite being accepted at several top colleges where she would have gone into journalism or the diplomatic corps, Ann decided instead to see the world. She joined the American Youth Hostel Program. She worked on a farm in New Hampshire. Then went on a trip to Europe just before WWII and then on to South America. She lived in Lima, Peru and traveled extensively with a friend from the group for two years, returning in 1943. Her life was a whirlwind and then she came home to find her place. After trying to work in an office in New Haven using her Spanish-she moved to Seattle, Washington. There she met Wally in a cycling club and they were married in 1948. They returned to New Haven in 1953. Ann worked at Yale University for Professor Turekian in the Geology and Geophysics Department beginning in 1966 until her early 80's on and off. Her true path in life though, was to be a mom, one she extended beyond her family. Those who knew her will miss her dearly, but cherish all she gave to them in life. Ann did not want a public funeral service and the family is honoring her wish. Memorial donations could be directed to the Connecticut Humane Society, 701 Russell Road, Newington, CT. 06111 or cthumane.org Arrangements in care of Beecher & Bennett, 2300 Whitney Ave., Hamden.