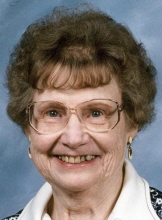 Ann Goebeler Watson, 92, of Hamden, wife of the late Robert Watson, passed away on July 1, 2008. She was born in Bronx, NY on March 18, 1916 to the late William and Dorothy Sinn Goebeler. Ann leaves her two sons, Kenneth Watson of Northford and his wife Merleen, and Arthur Watson of San Diego, CA and his wife JoAnne; grandchildren Scott Watson of Rockville, MD, David Watson of Boston, MA, and Stephen Watson of Northford, CT; and several nieces, nephews, grandnieces and grandnephews. Ann grew up in the Bronx. She and Bob lived in Queens following their marriage in 1940. Following his return from the service at the end of WW II, they bought a home in Williston Park, NY in 1947. They lived there until 1986 when they moved to Hamden. Ann was always an active member of the churches she belonged to, both in Long Island and Hamden. She enjoyed sewing and a good game of cards. Ann was a devoted wife and homemaker whose family was always her main focus. Her kind nature and generosity will be missed by all who knew her. A Funeral Service will be held on Tuesday, July 8, 2008, at 11:00 a.m. at The Lutheran Church of the Good Shepherd, 3680 Whitney Ave, Hamden. Friends may visit with the family at BEECHER & BENNETT, 2300 Whitney Ave., Hamden, on Monday evening from 6-8 p.m. In lieu of flowers, Memorial contributions in Ann's name may be sent to Connecticut VNA's Hospice Program, 33 North Plains Industrial Road, Wallingford, CT 06492.