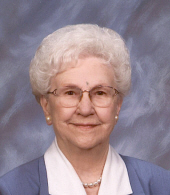 Ann Nelson Loomis, 89, of West Haven, passed away on Tuesday, June 8, 2010 at CT Hospice in Branford. Wife of the late George Holland Loomis, Ann is survived by daughter Joan and husband Charles Lugovich of West Haven and two grandchildren, Kristen Lugovich of West Haven and Charles Lugovich of Davie, FL. In addition to her husband, Ann was predeceased by son Roger Loomis and brothers Burton and Edward Nelson. Daughter of the late Elmer and Edith Flodquist Nelson, Ann was born in New Haven on October 31, 1920. She had been a secretary for the New Haven Railroad for 24 years and was a member of the First Congregational Church of West Haven. Funeral service Friday, June 11, 2010 at 10 AM at BEECHER & BENNETT-TAYLOR, 410 Campbell Ave., West Haven. Friends may visit with the family prior to the service from 9-10 AM. Burial will be private. Memorial contributions in Ann's memory may be made to the First Congregational Church of West Haven Book of Remembrance, 1 Church St., West Haven, CT 06516 or to CT Hospice, 100 Double Beach Rd., Branford, CT 06405.