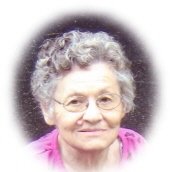 Meriden - Anna Janczura, 88, wife of the late Joseph J. Janczura died on Tuesday December 22, 2009 at Westfield Care and Rehab. She was born January 4, 1921 in Rockfall, CT a daughter of the late Paul and Anna (Ptak) Cichon and moved to Meriden two years after she was married. Anna was a parishioner of St. Stanislaus Church and loved to garden and crochet. She is survived by a daughter, Linda Somerset and her husband Gary of Berlin, a son, Joseph J. Janczura Jr. of Meriden, two sisters, Rose Misenti of Middlefield, and Terry DiMauro of Rockfall, and four brothers, Anthony and Paul Cichon both of Middletown, Peter Cichon of Rockfall and Adam Cichon of Westfield. She also leaves three grandchildren, Gary Somerset Jr. and his wife Elizabeth of Bowie, MD, Amanda Colon and her husband Philip of Kensington, CT and Christa Janczura of Newington, two great-grandchildren, Ciara Colon and Claudia Somerset as well as numerous nieces and nephews. Anna was predeceased by three brothers, John, Joseph and Frank Cichon, and three sisters, Sister Mary Rosemary, Sophie Barucci and Catherine Branciforte. The family would like to thank all the staff at Westfield Rehab and Care Center, especially the CNAs and the nurses on the 500 wing. A special thank-you also to Marnie, Jean, and Jacqueline, of Masonicare Home Health and Hospice for their care and understanding. A funeral service will be held on Monday, December 28, 2009 at 10:00 am at the Beecher & Bennett-Flatow Funeral Home, 48 Cook Ave., Meriden. Burial will follow at St. Stanislaus Cemetery. Relatives and friends my call at the funeral home on Monday from 9-10am, prior to the service.