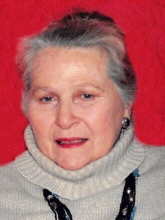 Anna Katherine Dunn, 96, of Hamden, formerly of North Haven, passed away peacefully on August 31, 2017 at Whitney Center. She was the loving wife of the late James Joseph Dunn. Anna was born in Covington, KY on August 29, 1921, daughter of the late Joseph and Anna Duttmann Gieswein. She was a very accomplished artist; she studied at the Art Academy of Cincinnati, the University of Cincinnati, the Affleck School of Fashion Design, as well as Southern CT State University. She also took watercolor classes under Charles DeCarlo. Her artwork was shown in such places as the New Haven Public Library from 1965-1968, the Whitney Gallery in Greenwich in 1972, the Willoughby Wallace Library in Stony Creek in 1978, and the Albertus Magnus Gallery in 1982. Later her art was featured in the Mt. Carmel branch of the New Haven Savings Bank in 1994 and the J.H.F.A. Gallery in New Haven in 1995. She had a permanent collection at New Haven Paint & Clay where she was a member, the United Illuminating Co. in New Haven, and also in several private collections. Anna was a member of the CT Water Color Society, the Mt. Carmel Art Association, the Brush and Palette, and the Liturgical Art Guild. She tried to communicate a joyful vision of color vibrations as seen in nature. Her work contained no sophisticated psychological or political symbolisms, but rather spontaneity and a disciplined simplicity. Japanese Sumi, the Zen philosophy and impressionism greatly influenced her work. Anna naturally used transparent water color and the acrylic mediums for her work. As the recipient of several awards, Anna was a fashion illustrator, art teacher to the New Haven Women’s Club, and private instructor at the Northern Branch YMCA. Anna will be deeply missed by her daughter Jennifer Bank (Steven) of North Haven; son Christopher Dunn of St. Petersburg, FL; grandchildren Anna and Matthew Bank of North Haven, and Abigail Dunn-Hobbs and Katherin Williams of St. Petersburg, FL. She was predeceased by her siblings Norma Gieswein, Lillian Hine, Jacob Gieswein, and Walter Gieswein. Relatives and friends are invited to attend a Mass of Christian Burial for Anna on Friday, September 15, 2017 at 10:00 AM at St. Rita Church, 1620 Whitney Ave., Hamden. Burial will immediately follow in St. Mary’s Cemetery, Hamden. Memorial donations in Anna’s name may be made to NPR (National Public Radio), P.O. Box 791490, Baltimore, MD 21279-1490. Beecher & Bennett Funeral Home, 2300 Whitney Ave., Hamden is in care of the arrangements.