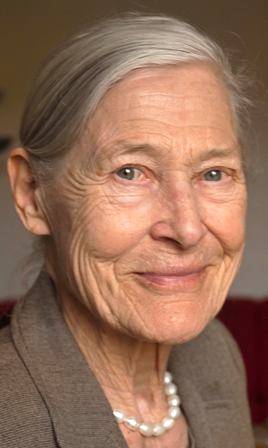 Anna Margareta (Kim) Veronis, age 92, loving wife of the late George Veronis, passed away December 26, 2020. Kim was born on May 23, 1928 in Vastervik, Sweden, a daughter of the late Frederick and Karin Hermondsson Olsson. She was a gym teacher in Sweden before becoming a flight attendant for SAS airlines. She married her husband of 56 years, George Veronis, then moved to the USA and taught high school science to pregnant teens in New Haven in the 1970’s. Kim traveled extensively for her job, as well as for her own love of travel. Kim was fluent in several languages; including her native Swedish, as well as English, French, and some German. She loved crossword puzzles, gardening, decorating, yoga, and entertaining. Kim and George spent nearly every summer at a lakeside summer home on Cape Cod, Massachusetts. They were exercise enthusiasts as well, and would routinely jog for many miles and swim each day in the summer at their lake house. They were very active and enjoyed many years of travel in their long marriage, in particular to Australia, which they visited during many of George’s sabbaticals from Yale University. They also visited her family in Sweden at least once each year. Kim was in good health throughout most of her life, only declining somewhat in the last year since her husband George’s passing. She continued to walk and exercise every day. She is survived by her step-children, Melissa Odell and her husband Vinnie and Benjamin Veronis and his partner Chris Gilbert; and step-grandchildren, Jocelyn Laracuente and her husband Nelson and Wesley Odell. She also leaves her sister Martha Goransson, and nieces Ulrika Wettlaufer (husband John, son Tor) and Ulva Renström, among many more nieces and nephews. Kim was predeceased by her sister Brita Renström.
Services will be held at a later date. Memorial contributions in Kim’s name can be made to Doctors Without Borders USA, P.O. Box 5030, Hagerstown, MD 21741, or by going to www.doctorswithoutborders.org. Arrangements are in care of BEECHER & BENNETT FUNERAL HOME, 2300 Whitney Ave., Hamden.