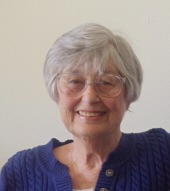 Anna Kristine Cote Nanamaker, 82 passed away on Wednesday, June 19, 2013 at the Masonicare Home Health and Hospice in Wallingford, CT. Beloved wife of 59 years to Fredrick W. Nanamaker Jr. They were an inseparable couple, with devotion to love, family and friends. Anna was born on September 20th 1930. She was the daughter to Anna Mae Olesen Cote and Raymond Cote of Hamden. She lived 45 years in Branford, before moving to Orange, and then to the Independent Living at Masonicare in Wallingford last year. Anna was the loving mother of three sons, Fredrick W. Nanamaker III and his wife Ann of Findlay, Ohio, David S. Nanamaker and his wife Maria of Guilford, CT. and Paul R. Nanamaker and his wife Lisa of North Branford, CT. Anna had four grandchildren that she was extremely proud of Benjamin, Bethany, Joseph, and Emma. Her brothers, Raymond and Bill Cote, and, sisters Gladys Roberts, and Edna Pearson predeceased Anna. Many nieces and nephews survive her. Anna was a 1947 graduate of Hamden High School. After raising her family, she worked at 960 Main St, Branford, CT, for over 18 years, for Dr. Richard Kaufman, Dr. Marvin Zimmerman, Dr. Denis Miller, Dr. David Eilbott, Dr. Robert Levine, and Dr. Edward Sheer, where she built very special friendships with coworkers that lasted a life time. Our family would like to thank the very special health care professionals from 5-2 cardiac unit, at Yale New Haven Hospital, Dr. Richard E. Kaufman and his staff, and also the staff at the Acute Care/Hospice facility at the Masonicare Home Health and Hospice, for all their dedication and loving care of Anna. Memorial contributions in Anna's memory may be made to Masonicare Home Health and Hospice c/o The Masonic Charity Foundation of CT. A memorial service to celebrate Anna's life will be held on Saturday, June 29,2013 at 10:30am at the Masonic Chapel in Wallingford, CT. Arrangements in care of BEECHER & BENNETT-TAYLOR FUNERAL HOME, 410 Campbell Ave, West Haven.