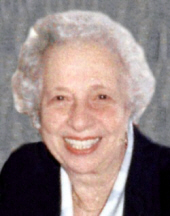 Anna L. (Montagna) DeVivo, age 104, of Hamden, passed away on November 16, 2017. Anna was born in New Haven on January 27, 1913, a daughter of the late Alfonso & Carmela (Perrelli) Montagna. She was predeceased by her husband William F. DeVivo; her sister Lena McCarthy, and brothers Louis, Cosmo, & Nicholas Montagna. Anna is survived by her son, William A. DeVivo, Sr. & his wife Bianca of Orange; grandchildren, William A. DeVivo, Jr. & his wife Mariaelena of Durham and Ann Marie Keaney & her husband John of North Haven; great-grandchildren, Francesco, Cristiana & Valentina DeVivo and Connor, Jack, William, Bianca & Marielena Keaney, and a sister, Alice Larrivee. A resident of the Mt. Carmel section of Hamden most of her life, Anna was a retired seamstress. Friends may visit with her family on Monday from 5:00 to 7:00 PM at BEECHER & BENNETT FUNERAL HOME, 2300 Whitney Ave, Hamden and may attend her funeral on Tuesday, Nov. 21, at 9:00 AM from the funeral home, followed by her Mass of Christian Burial to be celebrated at 10:00 AM in St. Rita Church. Burial will take place in St. Lawrence Cemetery.