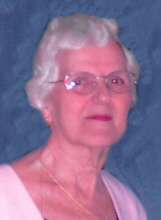 Anna Rosa Finer, 83, of Hamden, passed away on March 17, 2016 after a brief illness. Anna born in New Haven on November 25, 1932; she was the daughter of the late Alphonse & Gemma (DelGrande) Beltramello. She was recently widowed after 59 years of marriage to Kenneth L. Finer. Anna is survived by her beloved daughters, Darlene A. Levy & her husband Gordon of Pickens, SC and Lois M. Boling & her husband William of Windsor, CT; grandchildren Kenneth, Christina & Joseph Boling and Benjamin Levy, and her brothers, Silvio Beltramello of Branford and Anzio 'Andy' Beltramello & his wife Mary of Hamden. She was predeceased by her brother Charles Beltramello. Anna was a resident of Hamden since 1984; she enjoyed flower gardening, needlework, handcrafted items, bird watching, and lunches with her many friends. She started her career as a bookkeeper in New Haven and while her children were in school, she became a Foster Mother, fostering for 17 years to 79 infants that were adopted through Catholic Family Services of New Haven. She retired from Neurology Associates in 1996. Friends are invited to visit with her family on Tuesday, March 22nd from 9:30 AM to 10:30 AM at BEECHER & BENNETT FUNERAL HOME, 2300 Whitney Ave, Hamden followed by a Mass of Christian Burial in Our Lady of Mt. Carmel Church at 11:00 a.m. Burial will take place in All Saints Cemetery, North Haven. Contributions in Ann's memory may be made to: Catholic Family Services, 501 Lombard Street, New Haven, CT 06513 or a charity of your choice.