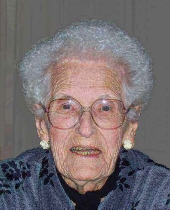 MERIDEN - Anne Coutts Barton, 99, a resident of the Miller Memorial Community for the last two and a half years, passed away on Tuesday, Nov. 22, 2005. She was the wife of the late Irving Birch Barton. Born in Glasgow , Scotland on Feb. 22, 1906, Mrs. Barton was the seventh of eight children of the late Dr. James and Mary Marshall Coutts. In 1916, at the age of 10, Mrs. Barton left Scotland for the United States, residing in West Hartford, where she completed her schooling and met her husband. Mrs. Barton had been a Meriden resident for 70 years and, with her husband, raised five children. She is survived by four children, David Irving Barton and his wife, Trisha, of Darien, Barbara Barton Davidson and her husband, Wayne, of Savannah, Ga., Stephen Marshall Barton of Charlestown, R.I. and Kenneth Alan Barton and his wife, Janet, of Meriden. She enjoyed 14 grandchildren and 20 great-grandchildren. She was predeceased by a daughter and son-in-law, Gail Barton Mitchell and her husband, Patrick. A memorial service for Mrs. Barton will be held at 11 a.m. Saturday, Dec. 3, at Beecher & Bennett-Flatow Funeral Home, 48 Cook Ave., Meriden. In lieu of flowers, memorial donations may be made to The First Congregational Church, 62 Colony St., Meriden, CT 06451 or The American Cancer Society, 73 Haynes St., Manchester, CT 06040. Her family would like to thank the staff of the Miller Memorial Community for the wonderful care they provided their mother.