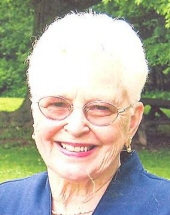 Meriden - Anne(Houdlette) Disbrow, 85, wife of 59 years to Curtis L. Disbrow died on Monday, January 14, 2013 at home surrounded by her family. She was born April 29, 1927 in Meriden a daughter of the late John and Bertha (Gretchel) Houdlette. Anne was a life long resident of Meriden, a member of First Congregational Church of Meriden where she was a diaconate and a member of the choir and had also worked with the Meriden Soup Kitchen for 20 years. In addition to her husband, Anne is survived by two sons, Steven (Nancy) Disbrow of Meriden and James Disbrow of Meriden, and two sisters, Betty Falton of Massachusetts and Jean Turco of Maine. She was predeceased by a son John C. Knell and a sister, Nathalie Ahern. Relatives and friends may call at the Beecher & Bennett-Flatow Funeral Home, 48 Cook Ave., Meriden on Thursday, Janaury 17, 2013 from 2-4pm. A service, officated by the Rev. Bruce Miller, will be held at 3:30pm. Burial will be at the convenience of the family.