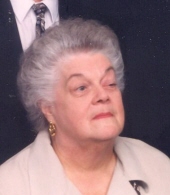 MERIDEN - Anne Ivers Reiske, 75, of 110 Tulip Drive, passed away on Monday, April 10, 2006 at Coccomo Memorial Health Care Center. She was the wife of the late Richard F. Reiske. Born in Meriden on Dec. 27, 1930, she was the daughter of the late Thomas and Olive Corbly Ivers. She was a graduate of LaSalle Junior College in Newton, Ma and until her illness had been employed as Medical Secretary in the office of Dr. Cliff D. Martell. She is survived by three sons, Lee Reiske of Meriden, Tom Reiske and Chad Reiske, both of Alabama; two daughters-in-law, Shelly Reiske and Mandi Reiske, both of Alabama; five grandchildren, Erica, Madison, Hunter, Ryan and Ava Reiske, all of Alabama; a sister-in-law, Elaine LaButis of Meriden; and special cousins, John and Arcangela Claffey. She is also survived by many close friends, Bill Cusano, Dolores DiGiovanni, Dr. Cliff Drechsler Martell, Linda Cashman, Mary Rose Salamone and Marianne Poirier. She was predeceased by a half-brother, David Ivers and a half-sister, Shirley Murphy. The family would like to thank the staff at Coccomo Memorial Health Care Center, expecially Wing 100. The funeral will be held Tuesday, April 18, at 10:30 a.m at St. Joseph Church, where a Mass of Christian burial will be celebrated. Burial will follow in St. Mary's Cemetery in New Britain. Relatives and friends may call at the Beecher and Bennett Flatow Funeral Home, 48 Cook Ave., Meriden, Monday, April 17, from 4 to 8 p.m.