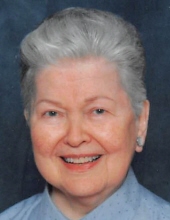 Anne Louise Hershey Ockert, 92, of Hamden, died peacefully on October 13, 2018, at Whitney Center following five years of progressing dementia. She was the widow of the late H. Charles Ockert. Born June 24, 1926 in Lafayette, Indiana, she was the daughter of the late Phares Robert and Mary Gertrude Hershey. She was also predeceased by her sister, Elizabeth Barnabee, and a granddaughter, Mary Grace. Raised in Evanston, Illinois, she attended Orrington, Haven, and Evanston Township High Schools; was a graduate of Northwestern University, where her father was a Romance Language professor; and was a member of Gamma Phi Beta sorority. A member of the Evanston Music Club, she pursued her singing avocation with professional study in Chicago, where she was a soloist in churches, concerts, and on the NBC nationwide radio network show 'Music from the Heart of America.' She and her husband moved to the New Haven area in 1949, where she continued her vocal study in NYC and New Haven, and was a soloist in many area churches, clubs, concerts, and operettas for 40 years. She also worked part-time as a secretary and bookkeeper for 48 years in her husband's insurance agency. She was a long-time member of the High Lane Club, New Haven Woman's Club, a 50-year member of AAUW, P.E.O. Sisterhood, St. Ambrose Music Club, New Haven Country Club, and the choirs and women's groups of Spring Glen Church, and later Trinity Lutheran Church. She also regularly visited the elderly, ill, and shut-ins at various rest homes and rehab centers throughout the area. Her daughter, Barbara Anne Ockert Brundage and her husband, Laurence, her son, Paul Hershey Ockert and his wife, Pamela, and her niece, Cathe, survive her. Five grandchildren on whom she doted also survive her: Martha and her fiance, Olaoluwatoni, Theodore and his wife, Suchita, Jonathan, Amelia, and Benjamin. A memorial service will be held at 11:00am on Saturday, November 24, 2018 at Trinity Lutheran Church, 292 Orange St., New Haven, CT. Burial will be private. Memorial gifts may be made to the church or charity of one's choice or to Seasons Hospice, 1579 Straits Turnpike, Unit 1-E, Middlebury, CT 06762-1835, online at www.seasonsfoundation.org Arrangements are in care of Beecher & Bennett Funeral Home, 2300 Whitney Ave., Hamden, CT.