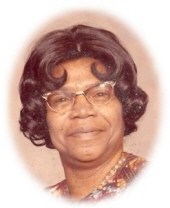 MERIDEN - Annie B. Royster, 91, formerly of 29 Morgan Street, died Friday, May 4, 2007 at Miller Memorial Community. She was the wife of the late Harry Royster. Born in Oxford, NC, April 14, 1916, she was the daughter of the late Zeb and Clara Wimbush Marrow. She had been employed at Bailey's Laundry in Meriden and was an active member of Mount Hebron Baptist Church, serving on the Usher Board and the Mother Board and was a Pastor's Aide and a Missionary. She is survived by a daughter, Cynthia and her husband, John H. Preston; four sisters, Cornelia and her husband, John H. Hargrove of Henderson, NC, Phoebe M. Gaither of Meriden, Bessie L. Martin of Henderson, N.C. and Catherine Williams of Creedmoore, NC; five grandchildren; ten great-grandchildren and eight great-great-grandchildren. She was predeceased by eight brothers and sisters and one great-grandchild. Funeral service Thursday, May 10, 2007 at 1 p.m. at Mount Hebron Baptist Church, 84 Franklin St., Meriden. The Rev. Willie J. Young will officiate. Burial will follow in Walnut Grove Cemetery. Relatives and friends may call at the church from 12 noon until 1 p.m. prior to the service. Arrangements are under the direction of the Beecher and Bennett Flatow Funeral Home, 48 Cook Ave., Meriden.