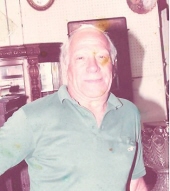 Meriden- Anthony C. Spratta, 95, husband of the late Dolores Spratta passed away on Tuesday, October 11, 2016 after a long battle with Alzheimer's disease. He was born May 26, 1921 in Waterbury a son of the late James and Pasqualine (Ferruci) Spratta. Anthony proudly served in the U.S.Army during World War II as a medic in the South Pacific during the battles of Saipan and Iwo Jima. After returning he worked as a buffer with International Silver Co.. In 1966 he and his wife Dolores opened Dee's Antiques and enjoyed many years operating it together. He is survived by a daughter Holly Digertt and her husband John of Middlefield, a son Thomas J. Spratta and his partner Annie of Meriden, two grandchildren John Anthony Digertt and Jacqueline Agramonte, a brother Vincent Spratta of Meriden and a sister, Margaret 'Molly' Orlando of Texas. He was preceased by his brother, Johnny and sisters, Josephine O'Leary, Louise Cleveland , Beatrice Spratta, Lucy Celentano, Dorothy Orsini and Rosemary Vecca. A heartfelt thank-you to Anthony's angel caregivers, Miss Ro and Robert (aka 'Joe) for their outstanding, loving and compassionate care. A funeral service will be held on Friday, October 14, 2016 at 11am at Beecher & Bennett-Flatow Funeral Home, 48 Cook Ave., Meriden. Burial beside his wife, will follow in Gethsemane Cemetery, Bee St., Meriden. Relatives and friends may visit with the family on Friday from 9am-11am, prior to the service. In lieu of flowers donations may be made to Alzheimer's Association Connecticut Chapter, 200 Executive Blvd, Suite 43, Southington, CT 06489 or at www.alz.org/ct. To send a condolence please see obituary at www.beecherandbennett.com.