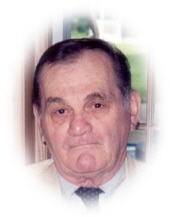 Anthony F. Esposito, age 75, of Woodbridge, beloved husband of Margaret C. Esposito passed away peacefully on Aug. 15, 2006 with his loving family by his side, after a long illness. He was born in New Jersey on March 14, 1931, the son of the late John Esposito and Frieda Esposito Thomsen. He grew up in New Haven and lived in Orange for many years. He was the cherished father and step-father of David (Sue) Esposito of Orange, Mark Esposito and his partner, Letitia Jacobson of East Hampton, John (Mary Beth) Scharer of North Carolina and Peter (Shawnee) Scharer of California. Loving grandfather of Anthony and Katherine Esposito and Alex Scharer. He is also survived by his sister, Vera (Harold) Eddy of North Haven and his brother Germinal (Nancy) Esposito of Rhode Island and loving nieces and nephews. He was predeceased by his first wife, Vivian Squailia Esposito and a brother, John Esposito. He served in the US Army during the Korean War and was a recipient of The Purple Heart. He worked in the food service industry during his working career. He was the President of the Orange Babe Ruth League in 1975 and received the Man of the Year Award that same year. He also was an associate member of the Greater New Haven Culinary Association for many years. Funeral service Saturday, Aug. 19 at 10 a.m. at BEECHER & BENNETT - TAYLOR FUNERAL HOME, 410 Campbell Ave. at Court St., West Haven. Friends may call Friday from 4 - 8 p.m. Entombment in St. Lawrence Mausoleum. Contributions in his memory may be made to the Hospital of St. Raphael Foundation, 1450 Chapel St., New Haven, CT 06511.