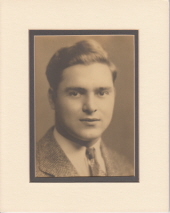 Anthony J. Parisi, M.D., 92, passed away peacefully on Thursday September 20, 2012. He was the husband of the late Shirley Denny Parisi. Born in West Springfield, MA on December 17, 1919, he was the son of the late Joseph Anthony Parisi and Raffaela Mazzarino Parisi. He was pre-deceased by two sisters, Cecelia Parisi Augustino and Michelina Parisi Hogue. He is survived by four sons, Joseph Parisi (Sarah) of Charlotte, NC; Michael Parisi (Lisa) of Cheshire; David Parisi (Elizabeth) of Bow, NH and Peter Parisi (Christine) of Wallingford. He is also survived by eight grandchildren, Emily Naumovic, Kristine Fife, Michael B. Parisi, Anna Parisi, Samantha Limoges, Allison Parisi, Laura Parisi, Amanda Parisi and two great grandchildren, Luke Naumovic and Paloma Naumovic. He is also survived by three nieces and a nephew. Dr. Parisi was a graduate of West Springfield High School, The College of the Holy Cross and Tufts University School of Medicine where he graduated from the accelerated three-year program during WWII. He did his residency in general surgery at the Hospital of Saint Raphael where he served as an attending throughout his career. During his career, he was among the first physicians to provide medical care at CT Hospice. A U.S. Navy Medical Corps veteran, Dr. Parisi served as the Medical Officer aboard the U.S.S. Livingston from 1945 to 1946. He later served on the U.S.S. Juneau as a Lieutenant Commander and Medical Officer and at the United States Naval Hospital in Jacksonville, FL from 1953 to 1955 as a member of the U.S. Naval Reserve Medical Corps. The family wishes to thank the caregivers who helped him in his final days from Masonicare, Griswold Special Care and CT Hospice, in particular, Beulah Edge, Addo Nyantakyi and Martha Wilson. Dr. Parisi's funeral will leave from BEECHER & BENNETT FUNERAL HOME, 2300 Whitney Avenue, Hamden, CT on Monday, September 24, 2012 at 9:30 AM for his Mass of Christian Burial that will be celebrated at 10:00 AM in Our Lady of Mt. Carmel Church, 2819 Whitney Ave, Hamden. Interment with Military Honors will follow in Centerville Cemetery. Friends may also visit with his family at the funeral home on Sunday from 4:00 to 8:00 PM. In lieu of flowers, memorials may be made to CT Hospice, 100 Double Beach Rd, Branford, CT 06405.