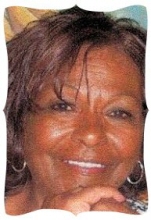 Antoinette 'Pina' Wynkoop, 'Sissy, Toni, Sunshine', 64, was called to her eternal rest on October 18, 2008. She was born June 2, 1944 in New Haven, CT, the daughter of Anna (Santos) Stanley, and the late war hero Antonio Pina and the late Howard Stanley. Besides her mother, Anna, she is survived by three sons Michael (Sandra) Wynkoop, David (Barbara) Wynkoop, and Paul (Kellie) Clark all of Waterbury, and two daughters Kim Wynkoop of Hamden and Angela Wynkoop of New Haven. She is also survived by a sister, Priscilla (Pina) Andrade and four brothers Howard, Frank, Jessie and James of New Haven. Mrs. Wynkoop was blessed with a grandson Paul Anthony Clark II, and sixteen beloved grandchildren and two great-grandchildren. She also leaves a cherished cousin Carol Santos and special friend James Wise, as well as a host of aunts, uncles, cousins, nieces and nephews. She was predeceased by her paternal grandparents Laura and Pa Joe Barette. Antoinette was a graduate of New Haven's Wilbur Cross High School. She was particularly proud of her Cape Verdean heritage. She dedicated her life to a career in human services and was a retiree of Southbury Training School. Antoinette was a champion for the homeless, and a great support to individuals with disabilities. Her greatest achievement and profound joy was her children and grandchildren for whom she dedicated her life. She took great pleasure in cooking for them and decorating their homes. Friends may visit with the family Thursday, October 23 from 9 - 10 a.m. at BEECHER & BENNETT-TAYLOR FUNERAL HOME, 410 CAMPBELL AVE., WEST HAVEN followed by a Mass of Christian Burial in St. Martin de Porres Church at 11 a.m. Interment in St. Lawrence Cemetery following the service.