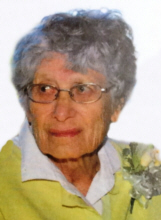 Meriden-Arline S. Ritchie, 96, wife of the late Charles W. Ritchie Jr., passed away peacefully on Thursday, May 25, 2017 at the Village at Kensington Place. She was born September 28, 1920 in Meriden to the late Frank and Louise (Runge) Sievert. Arline was a member of Immanuel Lutheran Church, was an artist who painted with watercolors, enjoyed the Meriden Senior Center, and was an avid Red Sox and UCONN sports enthusiast. Above all, Arline was a devoted wife, mother, and grandmother. She is survived by three children and their spouses; David and Barbara Ritchie of Meriden, Susan and Gary Neilan of Kensington, and Kenneth and Gina Ritchie of Meriden, seven grandchildren; Julie Connard, Daniel and Kevin Neilan, Steven, Carly, Christopher, and Brian Ritchie, and three great-grandchildren; Charlie, Emilia, and Elyse. She is also survived by a brother, Raymond Sievert of Meriden, and several nieces and nephews. She was predeceased by a brother, Edward Sievert. A memorial service honoring Arline will be held on Saturday, June 17, 2017 at 11am at Immanuel Lutheran Church, 164 Hanover St., Meriden,CT 06451. Burial will be private. Donations in Arline's memory may be made to Immanuel Lutheran Church at the above address. The Beecher & Bennett-Flatow Funeral Home, 48 Cook Ave., Meriden has been entrusted with the arrangements.