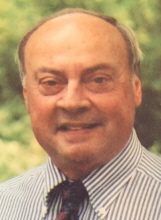 Arnold John Belfonti, Sr, age 78, formerly of New Haven, passed away on February 3, 2017 in Plantsville, joining his late wife Jean Margaret (Thomson) Belfonti to celebrate her birthday in Heaven. He was born in New Haven on September 2, 1938 to the late Americo & Helen Paolini Belfonti. Arnold will be remembered by his son Arnold J. Belfonti Jr & his wife Tricia of Southington; brother, John Belfonti & his wife Sharon of Orange; his two granddaughters Madeline & Olivia Belfonti and several nieces & nephews. Arnold was predeceased by his sister Marie Shannon and brothers Richard & Robert Belfonti. He was a 1956 graduate of Hillhouse High School. Shortly after high school he spent 8 years in the US Coast Guard. Arnold was a life long resident of New Haven and for 37 years worked as a civil engineer for the CT-D.O.T. He had a passion for golf but most of all, he loved spending time with his family. Friends may attend his funeral on FRIDAY, February 10th at 9:00 AM from BEECHER & BENNETT FUNERAL HOME, 2300 Whitney Ave, Hamden, with his Mass of Christian Burial will be celebrated at 10:00 AM in St. Rita's Church, 1620 Whitney Ave, Hamden. Friends may also visit with his family at the funeral home on WEDNESDAY, February 8th from 5:00 to 8:00 PM. Burial with Military Honors will follow his Mass on Friday in Beaverdale Memorial Park. In lieu of flowers donations may be made in Arnold's memory to: Connecticut Children's Medical Center Foundation to benefit the Pediatric Cardiology Dept. 282 Washington St, Hartford, CT 06106.