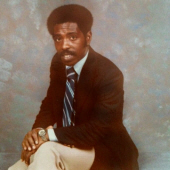 Arthur A. Spence, age 64, of New Haven, passed away on June 18th, 2015. Born in Atlanta GA on May 29, 1951 he was a son of the late Willie Spence Sr. & Magnolia Childs. Arthur was predeceased by his wife Hattie L. Whitfield Spence and his brother Willie Spence Jr. He is survived by his daughters, Leslie Spence of New London, Tracey Conyers & her husband David of Grayson, GA and Kristal Spence of New London; his son Arthur Allen Spence II of New London; his grandson Ryan Conyers, and his sisters, Lois Pollard & her husband Carl of Hamden and Fannie Jackson of Hamden. He was a former regional manager for the Dial America Company and also owned and operated AJ's Bait and Tackle in New London and was a member of Omega Psi Phi Fraternity. Funeral service will be held at 11:00 AM on Tuesday, June 23 at BEECHER & BENNETT, 2300 Whitney Ave., Hamden. Friends may visit with his family prior to the service, from 10:00-11:00 AM. Burial will follow in Beaverdale Memorial Park.