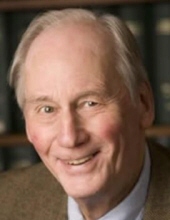 Arthur Brooks DuBois, M.D. (Nov. 21, 1923 - Dec. 24, 2019) died in New Haven, Connecticut, where he and his wife Robin had lived since 1974. Born in New York City, Dr. DuBois was predeceased by his parents, Eugene Floyd DuBois, M.D. and Rebeckah Rutter DuBois; and his brother and sister, Eugene DuBois and Rebeckah DuBois Glazebrook. A research scientist, clinician, professor of medicine, and administrator; Dr. DuBois' legacy to science includes 181 publications, co-authorship of The Lung in several editions from 1955 to 1986, Body Plethysmography 1969, and forty-nine medical trainees, including two generations of the same family. Although they had separate paths, Dr. A.B. DuBois' and Dr. E.F. DuBois' careers represent a century of continuous physiological scientific research. Dr. Arthur B. DuBois developed his interest in science at Milton Academy, where he prepared to enter Harvard College in 1941. Because of the war, Dr. DuBois was accelerated to medical school, and received his M.D. in 1946 from Cornell University Medical School. He interned at New York Hospital, where his father had retired in 1941 as chief of medicine. Dr. Arthur B. DuBois Lt. (j.g.) MC served in the United States Navy from 1947 to 1949 at St. Albans Naval Hospital and USNA at Annapolis, MD. After earning a fellowship in physiology at University of Rochester, Dr. DuBois served as Senior Assistant Resident in Medicine at Peter Bent Brigham Hospital. From Boston to Philadelphia, Dr. DuBois began his twenty-three year career at University of Pennsylvania in 1952, where he ascended as Assistant Professor of Physiology, Associate Professor of Physiology, Associate Professor of Medicine, Professor of Physiology and Professor of Medicine. After accepting an offer from Dr. James D. Hardy to direct the John B. Pierce Foundation, Dr. DuBois moved to New Haven in 1974, where he became an administrator, taught medical students, produced scientific research and received research grant funding. Throughout his career Dr. DuBois said his interest in science was inspired by an 'insatiable curiosity.' This was fed in part by his lifelong associations with the Marine Biological Laboratory and the Woods Hole Oceanographic Institute. Along with many awards, honors, and membership in honors societies, Dr. DuBois' career in physiology brought international recognition and membership in many national scientific committees ranging from selecting scientist/astronauts in 1967 to submarine escape, 2002. Dr. DuBois' life in science was supported by his wife, the late Roberdeau C. 'Robin' DuBois, who died just three days after Dr. DuBois. Their marriage of nearly seventy years brought children Anne R. DuBois, Brooks DuBois and his wife Mary Salerno DuBois, and James E.F. DuBois and his late wife Desca Duncan DuBois; and grandchildren Laura B. DuBois, Brooks Michael DuBois, and Marian DuBois. Dr. DuBois also leaves many nieces and nephews and their children who will miss him. A Memorial Service honoring the lives of Dr. DuBois and his wife Robin will be held on Saturday, February 8, 2020 at 11 a.m. in Dwight Hall at Yale, 67 High St., New Haven, CT. Interment will be held at the Church of the Messiah Cemetery in Woods Hole, MA at a later date per the convenience of their family. Arrangements are under the direction of Beecher & Bennett Funeral Home, Hamden.