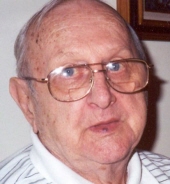 In Milford, June 26, 2006, Arthur Gunnar Carlson, 86, of Forest Hill Rd., West Haven, husband of Ethel Aldrich Carlson, father of Richard Carlson and his wife, Linda of West Haven, brother of Agnes Elizabeth Hagenstein and her husband, Herman of Winter Springs, FL and grandfather of Kristin Carlson of West Haven. Arthur was born Feb. 18, 1920 son of the late Carl Emil and Greda Nysrand Carlson. During WW II he was a Corporal in the US Army and attended Embry-Riddle School of Aviation. In his earlier years he worked as a watchmaker and later worked as a shop supervisor for the State of CT at the Cheshire Correctional Center for 25 years and retired in1981. He was a member of the Cheshire VFW. Funeral service Monday, July 3, 2006, at 11 a.m. at BEECHER & BENNETT TAYLOR FUNERAL HOME, 410 Campbell Ave., West Haven. Friends may call Sunday from 6-8 p.m. Contributions may be made to the American Diabetes Assoc., PO Box 1131, Fairfax, VA 22038-1131.