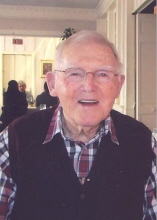 Meriden- Arthur 'Art' Horrigan, 97, passed away on December 25, 2016 at CT Baptist Home. He was born in Meriden of James and Signe Horrigan on January 3, 1919-one of five siblings, Jim, Dot, Kate and Marion, all of whom predeceased him. He lived in Meriden his whole life, graduating from Meriden High School. He and his wife Arlene (Brickheimer) just celebrated their 70th anniversary in November, married in 1946. Art was in the U.S. Army from 1941-45, stationed in the Philippines and returned home to work at International Silver Co. He then was a postal worker at the Meriden Post Office for more than 30 years, retiring in 1979. Art loved sports and was an avid golfer, in his later years a watcher of golf tournaments. He loved music, people and his family and had a great sense of humor. A kinder, more gentle Dad and husband could not be found. He will be missed by all. He leaves his wife, Arlene, daughter Deb of East Hartford and several nieces and nephews. The family would like to thank the wonderful caring staff of the CT. Baptist Home, especially the third floor, for their compassion and professionalism this past year. He could not have received better care anywhere. Heartfelt thanks to Dr. Neil Scollan for always being there when needed. A graveside service will be held on Friday, December 30, 2016 at 1:00pm at Sacred Heart Cemetery, 250 Gypsy Lane, Meriden. In lieu of flowers donations may be made to CT Baptist Home, 292 Thorpe Ave. Meriden, CT 06450. The Beecher & Bennett-Flatow Funeral Home, 48 Cook Ave., Meriden has been entrusted with the arrangements.